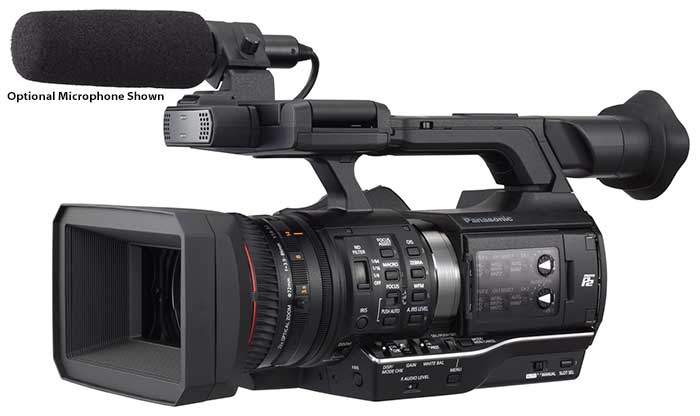 The AJ-PX270 is the first P2 HD handheld camcorder combining the high quality and incredible efficiency of low bit rate AVC-ULTRA recording and the flexibility of a 3G/4G/LTE wireless mobility. The 5-pound PX270 provides all the key functionality of the high-end, shoulder-mount camera (AJ-PX5000 P2 HD with AVC-ULTRA). It features newly-developed high-sensitivity, low-noise 1/3 type 3MOS imagers to produce stunning pictures, even in low lighting conditions.


With its innovative AVC-ULTRA codec, the AJ-PX270 features both low-bit rate and normal recordings. For high quality recording, the camera records in 100Mbps AVC-Intra100, as well as 200 Mbps AVC-ULTRA Class 200 (optional). For applications where file size is critical, e.g., for wireless feeds, the PX270 records in low-bit rate AVC-LongG for extended recording and AVC-LongG25 enables extended 1920 x 1080 10-bit 4:2:2 broadcast-quality recording (four times longer than AVC-Intra100 for the same memory space).


Networking functions are included as standard, and options are available to allow for proxy video to be automatically uploaded to the cloud and for compatibility with a planned cloud workflow, allowing immediate editing from a remote location.

The PX270 features a Wireless LAN function via an optional Wireless LAN dongle and supports the existing Panasonic live uplink solutions. Dongle support for wireless workflow over a mobile 3G/4G/LTE network is also scheduled for the near future. Thanks to these wireless features, users of the AJ-PX270 can easily uplink low-bit rate proxy data and full quality broadcast content. The handheld camera's network function makes the production work-flow more efficient and accelerates the broadcasting work-flow from shooting to on-air.


Two microP2 card slots enable the ultimate cost-effective operation. The microP2 card, with the same reliability as the P2 card, can be used without an adapter.

BREAKING NEWS! Panasonic has just released an app for the iPad that allows you to control the camera.

If this was hardware based and sold separately, this added functionality would likely cost more than the PX270 camera!

Now released on Apple's App Store, the P2ROP is a powerful tool that provides users with enhanced production capability, without the necessity of an expensive and dedicated hardware controller.

Last year during Bernie Mitchell's PX270 production tour, the HRP200 was seen as useful and an option for some users. By contrast however the P2ROP iPad application was enthusiastically acknowledged as a very useful tool, and a perfect example of "cool" functionality delivered on an industry standard platform, namely the ubiquitous iPad.

iPads are now everyday tools for ENG news and production. People use iPads for device control, for viewing of footage, for logging, for scripting, for slates, so now they can use them for Panasonic camera control also.

The P2ROP application for the iPad provides impressive functionality over camera control and workflows, amazingly this app is free.

Here's what the app can do: